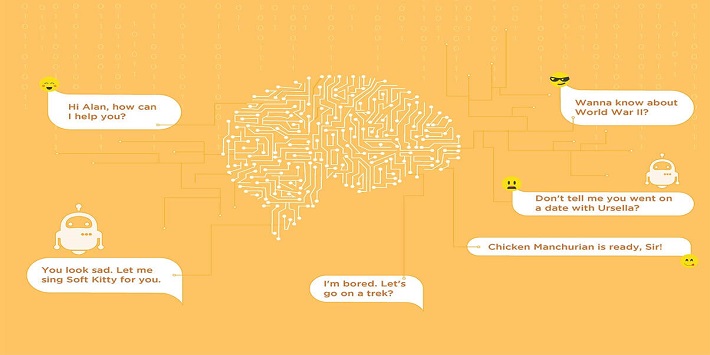 We live in an interesting era in the history of mankind. You will be surprised to know that Apollo 11, the computer that put Man on the Moon in 1969, whose assembly language code was recently published on Github, operated on 64KB memory whereas today’s kids have 64GB iPhones to click duckface selfies to upload on Instagram and play PokeMon Go, a viral game that marginally broke all time daily active users’ record in a week! Technically, 1 Million times more memory and 100 million times computational power at your disposal. After all, Moore’s law is nothing less than a super genius prediction.

Thought provoking extrapolation of the same Moore’s law, that says that the number of transistors in an integrated circuit and hence the computational power doubles itself every 2 years resulting into exponential technological growth, is applicable to the most evolving field of technology, Artificial Intelligence. For me, as the kid of Gen-Y, it is mind-blowing to think how the first movie ever was produced in the year my great grandfather was born, the first computer was built when my grandfather was still in his teens, the first Star Wars movie was released when my father learned fishing and how only last month, I blew my mind watching the first movie named Sunspring written by an AI program that christened itself as Benjamin. Not going to be long before I know, my kid wakes me up in the middle of the night someday and tells me, ‘Hey dad! One super intelligent robot called Trump has waged a war against humanity to destroy the entire human race.’ And WHAM! The most dreaded Apocalypse is a reality. Who knows?

If you are still optimistic and think that it is just a trippy thought experiment, here’s the generalized version of Moore’s law, depicted by Kurzweil as The Law of Accelerating Returns.

Not a long ago, we were struggling to artificially replicate the brain, read intelligence, of an insect and just so overwhelmingly, we are not too far from artificially achieving the intelligence of the most superior specie on the planet earth. What lies beyond that is a mystery for a layman but we indeed are living in the golden era of the exponential curve of technological progress. The singularity is near!

The journey so far hasn’t been easy. Ponder over this deep. Starting from the Big bang, to the birth of life on the earth, to development of human civilizations, to the million science experiments that went wrong along the progress including the first computer and the first lines of code, followed by a gazillion more, everything has contributed in making today’s Machine learn with humongous data to take intelligent decisions of its own, to probably build their own society tomorrow.

The Need of Artificial Intelligence

Have you ever been so lazy to be stalled on your bed with packets of tortilla chips and the latest episodes of Game of Thrones, that you just fantasized a remote control with multiple buttons to open the door or turn the fan on or do all that boring stuff? Oh wait, that still requires you to hold the remote and press the buttons, right? Gee, why don’t we have a robot that would just read our mind and do everything from household stuff to attending the unwanted guests without asking anything in return. Firstly, such robot will have to be super intelligent. Not only will it have to be efficient to perform routine tasks, but also understand your emotions viz-a-viz, mood swings and your behavioral pattern by observing you every minute and processing the data of your actions and emotions. Apart from the hard-coded seemingly basic set of functions, which in itself is a mammoth task, the machine will have to progressively learn by observations in order to perform as good as a smart human to serve you.

While a lot of this has been significantly achieved, it is still a very hard task for a machine to detect, segregate and arrange scented towels, hairdryers, Nutella box or contact lenses from a pile of junk than computing the complicated Euler product for a Riemann Zeta function. Machines can be entirely clueless and result into wrong outputs for what seems obvious that humans can solve in just a second’s glance.

You know how they say, “Don’t reinvent the wheel”, researchers have recently recreated a complex Quantum Physics experiment using AI just in an hour, that had won a Nobel prize in 2001 followed by years of determination and hard work by renowned Physicists like Einstein and Bose. We need AI to take care of trivial life problems so that we can invest our time and build a better AI to solve more important problems, like treating cancer or fighting against global warming. Fascinatingly enough, AI is actually everywhere; but more often than not we fail to see it. Because as John McCarthy, rightly says: “As soon as it works, no one calls it AI anymore.”

How AI is Everywhere Facilitated by Machine Learning

Right from a smartphone App that suggests you the nearby fast food outlet you might be interested in, to Facebook’s photo tagging Algorithm that detects your face with or without a beard, to Google’s self driving car, AI is everywhere and is deeply embedded in our lives without us realizing it. Our perceptions of AI are biased by Sci-Fi movies with evil machines trying to take over the galaxy. Intelligent machines designed to learn in order to become more intelligent by themselves to achieve Superintelligence is not hard to imagine. Technically, this would lie on the steepest slope of the exponential curve of intelligence versus time that we discussed before.

It is a beautiful realization that the roots of Artificial intelligence of a self driving car taking decisions that involve lives on the road lie within countless trivial and complicated Machine Learning algorithms that actually start with a few lines of code on your computer. My friend who had no background of computer science whatsoever before college, started learning programming in his sophomore year and took a long time before he could write fine algorithms in C++. He then started reading about Image processing, right from how a black and white image can be represented with a metric of numbers and went on writing a simple algorithm to detect a stable human hand. Soon with his growing interest, the human hand was replaced with colonoscopy images to robust deep learning algorithms that could detect cancer with image processing. His research paper got accepted in an international conference and has many other industrial applications.

Machine Learning and the power of Big Data

With unmatched computational power machines can process and be trained to make decisions using big data and predictive modelling. Imagine a person having superpowers who can predict future of everything, the world would fall at their feet. In a more logical sense, if a machine can process humongous amount of historical and real time data with prediction models, and learns over time to get better and better, imagine, the power of big data is nothing less than magical.

Several industries vastly use Machine Learning to take data driven decisions and make life smarter with the power of data accumulated over the years. Healthcare has already been positively impacted with the tremendous amount of work in this field that has contributed in saving thousands of lives. From Governance to Economy to Healthcare, name a domain and you have smart multi-variable regression models backed by big data, performing predictive analysis. Super intelligent machines can now decide your fate to survive in a Multi-Billion dollar stock market. In a way, AI has started affecting our lives tangibly even without us realizing it, and if you look back, it really happened in the blink of an eye.

Whether we live to see the empire of Artificial Superintelligence that surpasses our brain and the human race ends up being the “biological boot loader for digital Superintelligence” OR we produce extraordinary artificial intelligence to look beyond galaxies and travel to future, only time will tell. But one thing is for sure, whatever happens, at the heart of it lie several complicated Algorithms that actually started with a few lines of code.

1 thought on “How Artificial Intelligence is rapidly changing everything around you!”